The trend is a curve, not a line

Europe maybe at the beginning of an unusually severe recession, one that won't auto-reverse 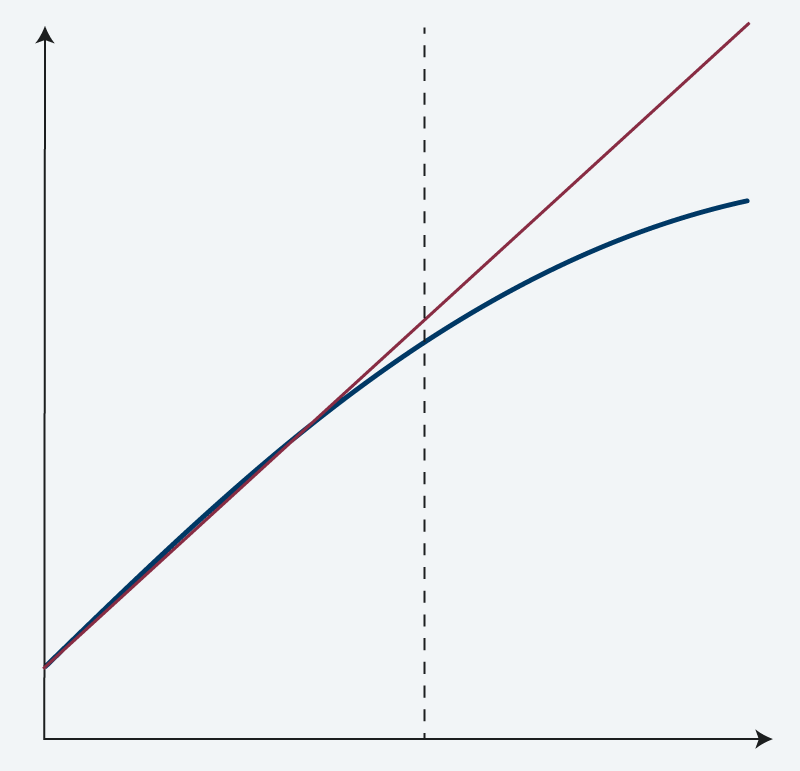 Shouting fire in theatre is something not done lightly, unless there actually is a fire in the theatre. For Europe’s economy, I think it is time to shout. What we are about to see this autumn and winter is not your standard recession, but the kind of shock that will shape our memories and narratives for the rest of the century.

Last week, I saw a projection of a 5% GDP shock for Germany, based on energy futures prices. In case of an ongoing stop to gas flows and a cold winter, the recession could be worse. Gazprom already announced an indefinite stop of flows through Nord Stream 1, apparently because of an oil leak.

The main quality of the ongoing recession is not so much its measured impact on GDP - though it will probably be substantial. It is the fact that we have exhausted our policy options. Monetary policy in the last decade went way overboard with large-scale quantitative easing and its subsequent refusal to reverse it. The west reacted to the pandemic with the biggest fiscal stimulus package in history.

Economists keep on telling us that we need fiscal expansion in a recession. I agree with that. But what is different this century from the previous one is that we keep on doubling down with stimulus and monetary easing. And we never grow out of the debt.

The mindset of the last decade was best captured by Mario Draghi’s promise to do whatever it takes. I am of two minds about his backstop. It ended the acute phase of the euro area’s sovereign debt crisis. But it also took away pressure for political reform. I believe the notion that policy should do whatever it takes is irresponsible. Policy is always a choice between conflicting objectives. The exuberance of the last decade was premised on short-term greed. It left us in the position we are in now - with few options left.

There are no policy tools that can stop the recession. Nor will the recession itself take care of inflation, for reasons outlined last weekend by Agustin Carstens, the general manager of the Bank for International Settlements. Our over-generous fiscal and monetary policies have created excess demand, and while supply conditions will ease, they will not return to the status quo ante.

It would be wrong to characterise what is happening as the end of globalisation. It is best to think of it as a series of shocks with a combined level and growth effect. Companies are no longer maximising the efficiency of their supply chains, but their robustness. They produce less, and what they produce is more expensive.

Europe is now going through a period of adjustment. One part of the adjustment is through higher interest rates - think middle to high single digits. I also expect a return to a modicum of fiscal discipline. I am not talking about austerity - but a gradual return to sustainable deficits. We no longer live in a world of yoyo economics where what goes down goes up again. Lower growth constrains your fiscal policy choices.

Macroeconomics, old and modern, used linear mathematical models. Economists like charts with trend lines, and view recessions as deviations from the trend. Economic policy is about re-connecting with that line. Economic forecasts are also hard-wired to predict a return to trend. But it is a very big assumption that the trend line is linear. It was linear for most of the 20th century. What changed in this century is that advanced economy productivity has been in secular decline. That should have been a warning sign. We are still on an upward growth trajectory in the long run, but one with a flattening slope. The closest mathematical object is a logarithmic curve - as depicted in the chart above the text. We are at the point of the dashed line, where the gap between the curve and line is starting to increase.

The job of economic policy should be to raise the slope of the logarithmic curve. This would require an increase in the productive capacity of our economies. We are not talking about old-style structural reforms to increase competitiveness through the suppression of wages. Competitiveness is zero-sum economics. It works for small economies - and for small-minded economists. Our crisis is one of flailing productivity growth across economies. The way out of this is through innovation of the creative-destruction variety. This is not the one we are very good at it in Europe. We innovate par ordre du mufti. The German idea of innovation is the next diesel engine made by Volkswagen.

I arrive at two conclusions. The fire in the theatre is for real. We will get the show back on the road, but it will take time, and it won’t be the same show.